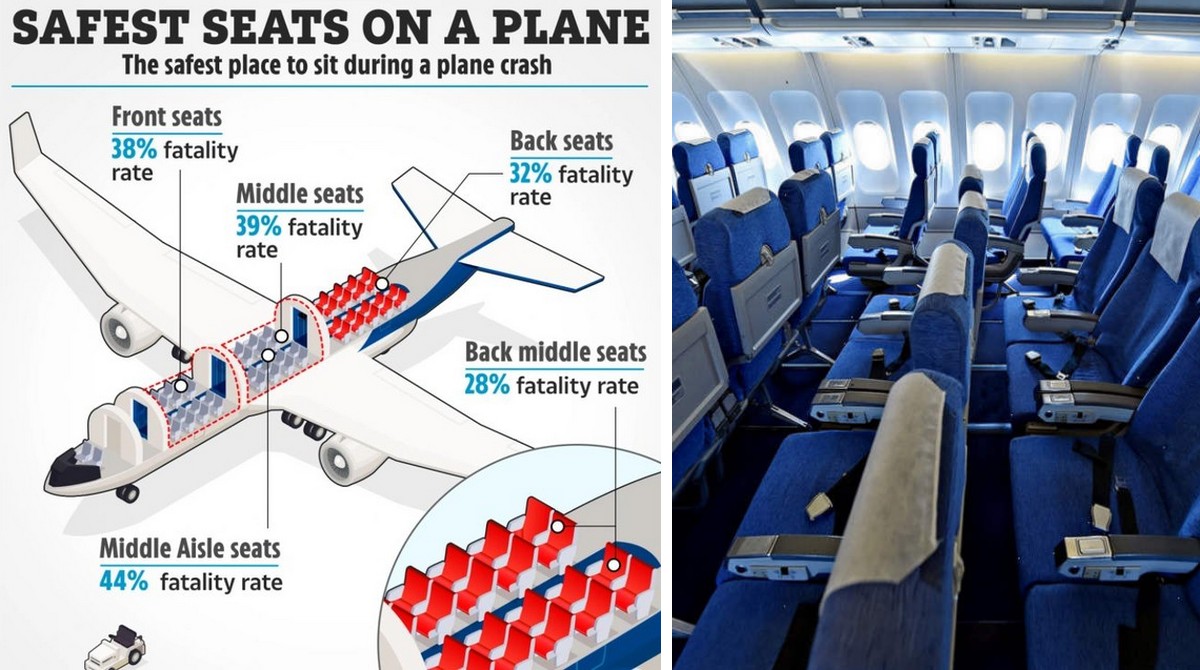 If you ask air travelers about the worst seat on the plane, they will probably point to the middle seat. However, it has great benefits. True, if the middle seat is in the back of the airliner.

An Australian airline Virgin Australia study found that only one percent of people book seats in the middle rather than aisle or window seats. However, the middle seat is the safest on the plane in an emergency, which is why experts have named it the best on board.

A study by the Aviation Safety Network analyzed 65 plane crashes and determined which locations were the safest based on survival rates. The middle seat in the back of the plane was found to be the safest, with a fatality rate of 28%, compared to seats further forward, which had a fatality rate of 44%. Seats in the back of the cabin had the lowest mortality rate at 32%.
Harro Ranter, executive director of the Aviation Safety Network, explained the findings this way: “I can’t think of anything that would make the front seat any safer, and in a real crash, the passengers in the back usually have the best chance of survival.” Fortunately, plane crashes are rare: a 2018 study found that the odds of dying on a flight are only 1 in 2.52 million.

Tourists who booked a “terrible place” have the right to claim additional free services. For example, Virgin Australia passengers and customers of other airlines are now encouraged to choose a middle seat, with some prizes as an incentive to do so. Anyone who books a ticket with an airline and chooses to sit between two other tourists can participate in the lottery. From now until April 23, 2023, one person will be randomly selected each week to win a prize, including cruises and vacations.

In addition, the “average girl” are entitled to apply for both armrests, which are necessary for flight. So, in a conversation with Insider, one flight attendant explained that this is an unwritten rule of etiquette that allows the passenger in the middle to have priority in the middle. “If I could write down the rules of airline etiquette, I would say that I would like more passengers to know that both middle seat armrests are for the middle seat passenger only,” she said.

This was confirmed by Dealchecker travel expert Rosie Panter in Cosmopolitan: “It is generally accepted that the middle seat passenger has won the lottery and can use both armrests. Why do you ask? An aisle passenger has the freedom to stretch their legs and stand up and sit down as they please, while a windowed passenger can stare out the window, dreaming of their vacation destination, or curl up and rest their head on the side of the plane for a little relax, without the risk of passengers having to climb over them while they sleep.” And only the average gets nothing – so it is fair that he can put his elbows on both armrests.

Also, tourists in the middle seats have more chances to get a free upgrade to the class of service. Jacob Wedderburn-Day, CEO of Stasher, told Sun Online Travel: If you don’t like the uncertainty of waiting to check in hours before your flight, then by all means choose the middle seat. Airlines are more likely to upgrade travelers sitting in the middle seat, as these seats are generally considered the least desirable seating position. So, if you don’t mind being sandwiched between two other people, it might be worth booking these seats,” he informed.