In these difficult times in the context of the Covid-19 pandemic, many travelers are seeking isolation and less crowded destinations. This is why some unconventional types of tourism are rising in popularity. In the past couple of months, increased interest in adventure and hard-to-reach destinations has been noted. Moreover, pilgrim tourism is rising in popularity. The reason for this is that many monasteries were conveniently built in remote, almost inaccessible places, seeing as monks have always looked for solitude and distance from the hustle and bustle. Even among them, some of the temples are distinguished by the complexity of their location and the difficulty to reach them. In this context, Tourism-Review presents the top 7 isolated monasteries in the world. 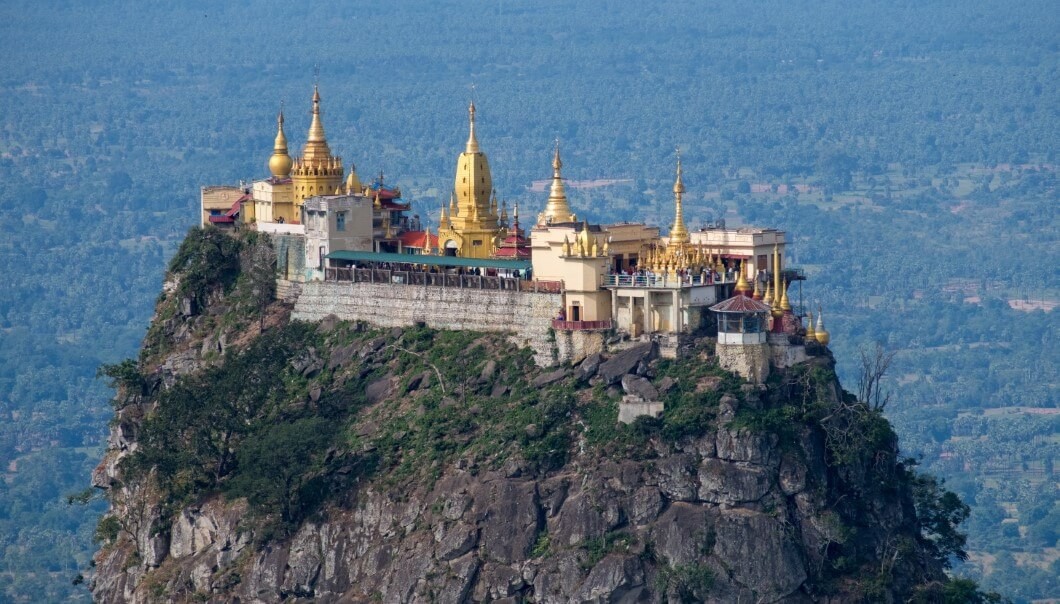 To the southwest of the Popa volcano, there is a small mountain Taung Kalat which is 737 meters high. On the top of it there is a Buddhist monastery, which can be called one of the most unusual temples in the world. Due to its unique location, the Taung Kalat monastery is said to have a wide variety of mystical properties. It is one of the most important pilgrimage centers in the country. Hundreds of thousands of Buddhists and tourists come here to honor the 37 Nats (spirits) living on the mountain. You can climb to the monastery by overcoming 777 steps along the stairs, built in the form of a covered half-spiral gallery. At the beginning of the path, the staircase is quite wide, made of stone, afterwards it is slightly more variable and there are also benches for rest on the wide staircase. 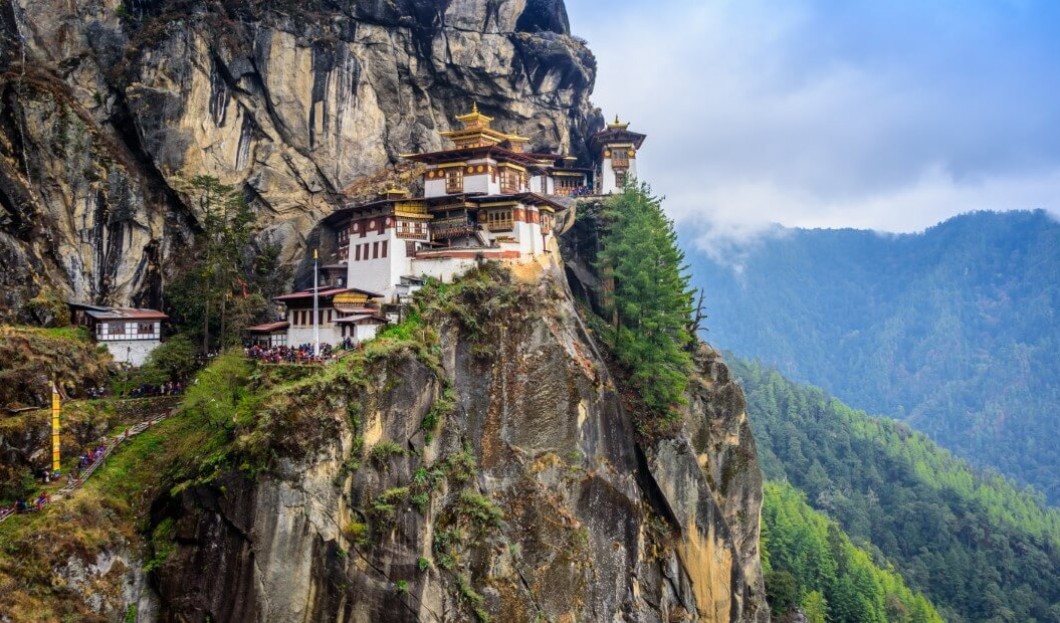 The Paro Takstang, also known as the Tiger’s Nest, hangs on a 3000-meter cliff in the Paro Valley and is one of the most remote monasteries in the world. Legend has it that Guru Rinpoche arrived here on the back of a great tigress, found a cave here and retired for a long meditation. This monastery was built in 1692 and is an active monastery of strict practice. You can get there by foot or to a certain height on mules. The ascent is not easy, the climb is more than 1000 meters and visitors are allowed only under the supervision of guides and only in a few rooms. 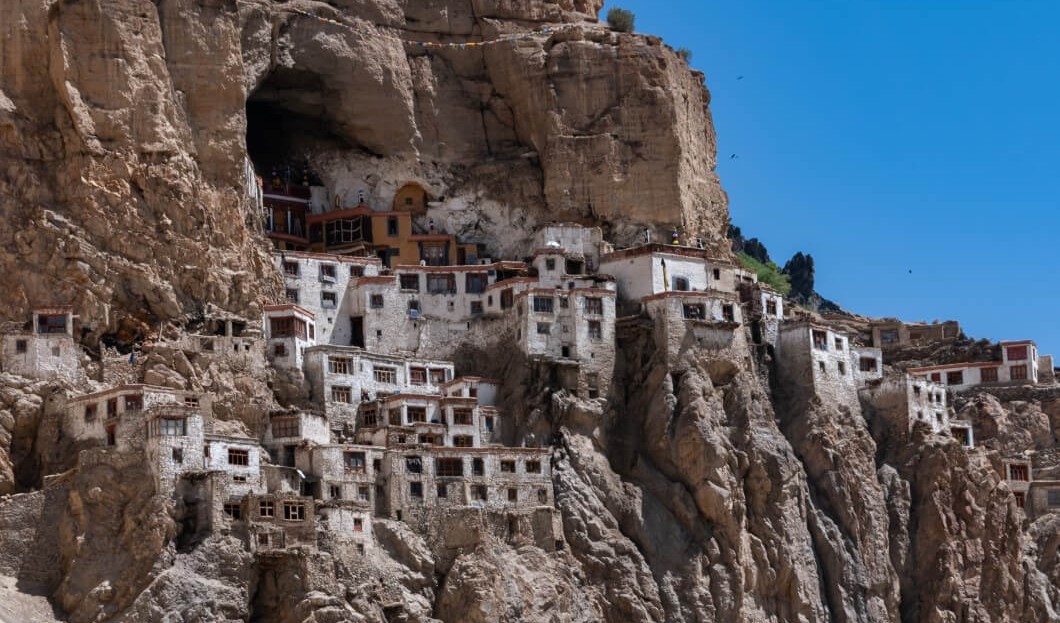 Hidden in the remote southeastern region of the Zanskar Valley, high in the Himalayas, the Phugtal Monastery literally hangs on a cliff 3800 meters high. This extraordinary monastery was founded in the 12th century by Lama Gangzem Sherap Sampo and about 70 monks currently live here. Surprisingly, although the structure is made of mud bricks, stones and wood, it has survived for hundreds of years. It is absolutely not easy to get to the Ladakh region itself, and then you still need to overcome the road to the Zanskar valley and from there go by foot to the monastery. 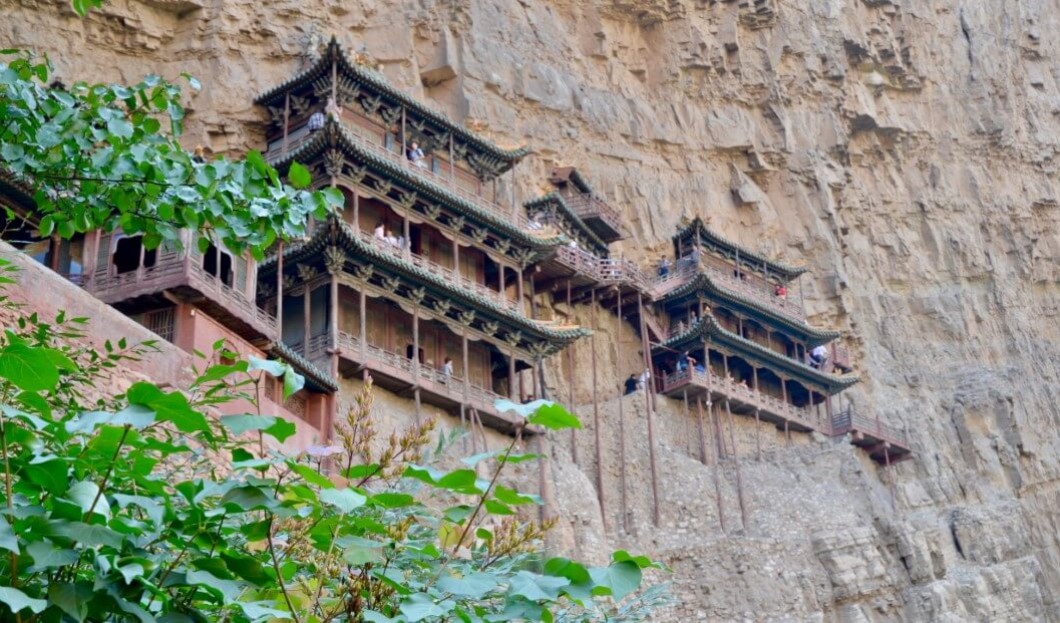 The next isolated monastery on the list is the Hanging Monastery which is located at the foot of the Hengshan Mountain, 65 kilometers from Datong City. It was built in 491 and has been left almost untouched. During its construction, a unique technique was used: the beams as a base were half driven into the mountain. Thus, the mountain itself is supported. The monastery is also unusual in the fact that it combined Buddhism, Confucianism and Taoism. Inside you can see the statues of Shakyamuni, Confucius and Laozi. Currently, the monastery can hardly be called inaccessible. It was opened for tourists and millions of inquisitive Chinese poured into this place. This, however, does not exclude the fact that in the past monks lived here in isolation. 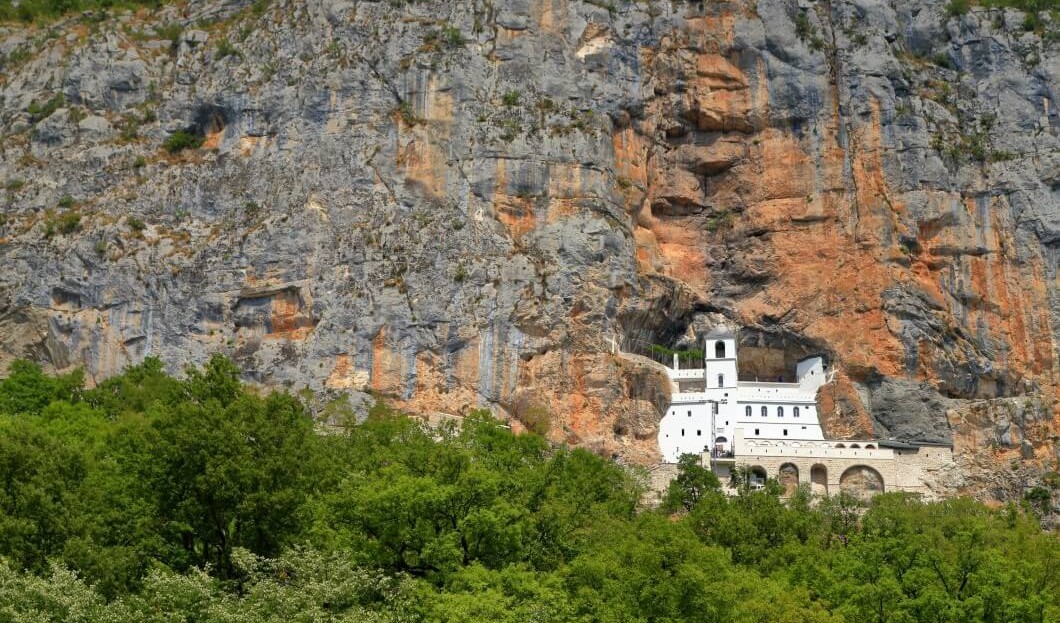 Ostrog is not the oldest monastery in Montenegro, but it is very popular and certainly one of the most isolated monasteries in the country. Orthodox pilgrims visit it almost as often as the Church of the Holy Sepulcher in Jerusalem. It was built in the 17th century, but the caves in the local rocks have served as a haven for monks for much longer. Today Ostrog is a functioning monastery with 12 monks living here. The place is also open for tourists. The monastery is located 8 kilometers from the highway connecting Podgorica and Niksic. You can get to Ostrog by bus or car, but it should be noted that the road is mountainous, which means it is narrowing and winding, meaning only an experienced driver can overcome it. 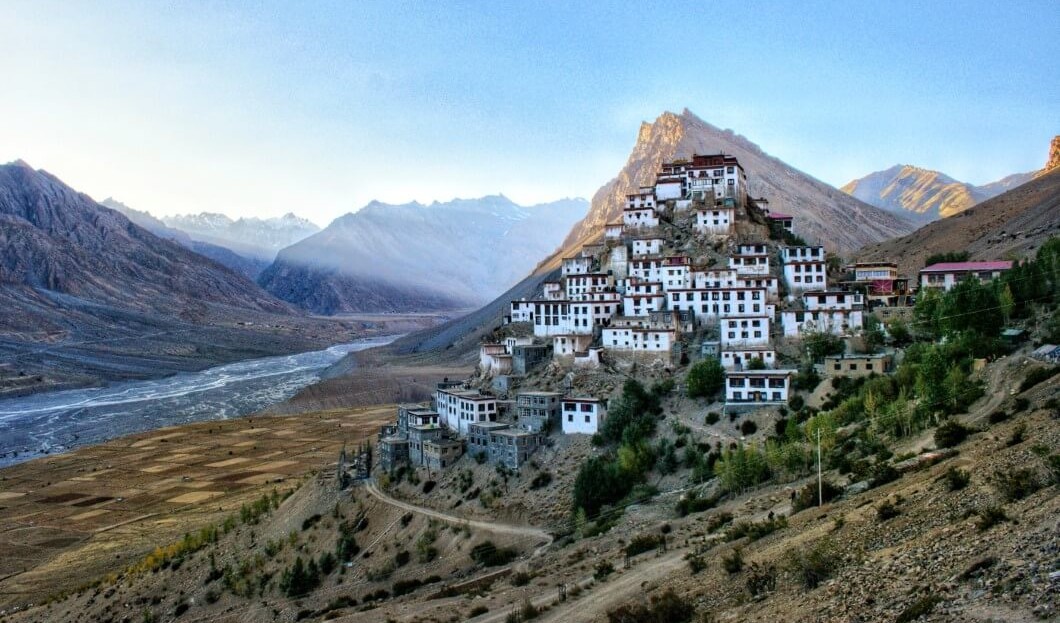 Another very interesting and remote monastery is the Key Monastery in India. The views of this monastery are somewhat reminiscent of the landscapes from the Lord of the Rings movie. The Tibetan Buddhist monastery is located in the village of Ki, in the Himalayas on a hilltop at an altitude of 4166 meters above sea level overlooking the Spiti Valley. The monastery went through many shocks like attacks, earthquakes and lootings, but it survived. Today the monastery is home to about 300 people. Tourists are also welcome here and can get to the monastery by bus or taxi from Kaza or Kibber, or by foot from there. 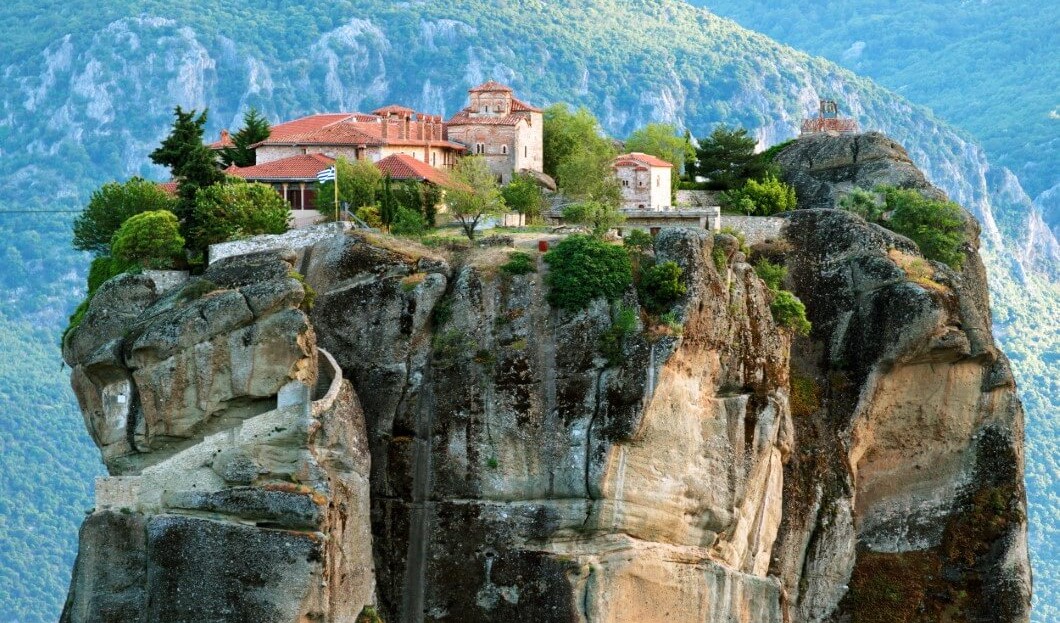 Among all the isolated monasteries worldwide, the famous Meteora Eastern Orthodox monasteries cannot be ignored. These temples are located on high cliffs in central Greece. There is a legend that the founder of the monastery, St. Athanasius, did not need to climb the rock, because an eagle brought him to a dizzying height. For laymen, however, the only way to get there is through tedious staircases. But even this is good, considering that until the 1920s, it was necessary to use ropes and special nets. The monastery is also known for filming scenes from the James Bond movie For Your Eyes Only.

Greece has announced that it will soon reduce quarantine requirements for visitors from more than 30 countries, including the United States and the United...
Read more

Homeland of tulips - Kazakhstan Most likely it will surprise you that Kazakhstan, and not the Netherlands, is the birthplace of tulips! Moreover, unlike the...
Read more

Both beach and restaurant restrictions will affect Egyptian tourists in hotels

Regarding the Prime Minister's decree of 5 May 2021, regulates some commercial and entertainment activities in Egypt at the end of Ramadan and during...

Everyone who has passed at least one section of the Great Wall of China is called a hero here. There are more than enough...

Athens presented Brussels with a national recovery plan after the coronavirus pandemic. Over the next six years, Greece intends to channel a total investment...

8 best Chinatowns in the world

Most large cities boast Chinatowns, enclaves of Chinese culture, trade and cuisine. Although none of them were necessarily planned or used according to a...
Погода
Київ

In the UAE, wife sues husband for changing passwords on social...

How Turkey is preparing to meet tourists in the new season

Vasyl Bodnar received the Ambassador of the State of Qatar to...

Cooperation between Ukraine and Greece to be strengthened in the interests...