An Egyptian archaeological mission working at the Temple of the Pharaohs (Boto) in Kafr el-Sheikh province discovered some of the ancient tools used in religious rituals at the temple as part of an archaeological excavation plan conducted by the Supreme Council of Antiquities.

Mostafa Waziri, general secretary of the High Council of Antiquities, said the discovery was very important because it included the tools that were actually used in the daily religious rituals of the goddess Hathor. The tools were probably quickly placed under a group of stacked stone blocks. Regularly the highest sandy hill in the south of the temple of the goddess Vajit is the hill of the pharaohs (Phutu).

Ayman Ashmawi, head of the Council’s Egyptian Antiquities Sector, said the discovery included a piece of limestone pillar in the shape of the goddess Hathor, a group of incense burners made of earthenware, one with the head of the god Horus. , and a group of clays that were used in the religious and ceremonial rituals of the goddess Hathor. In addition, there were small statues of the goddess Tawart and the idol of Toti, a small maternity chair, a large offering holder, Ujat’s pure golden eye, and remnants of golden scales used to gilt some other objects. 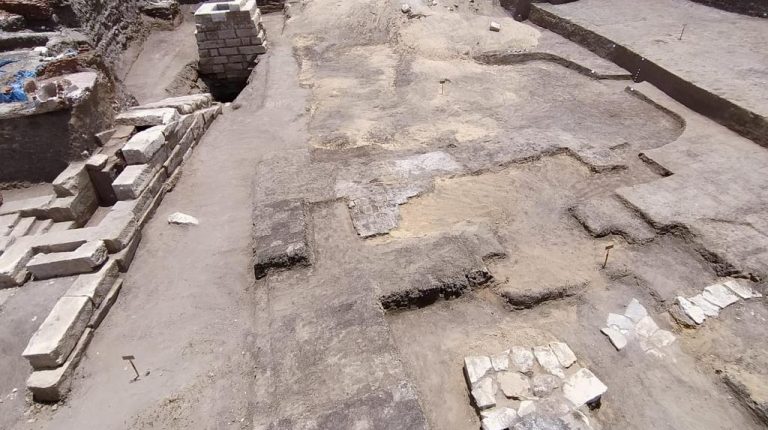 He noted that the mission found a remarkable group of ivory images depicting women carrying offerings, scenes of the daily life of delta mares, including plants, birds and animals, a large limestone lintel with hieroglyphic texts in relief, and part of a royal painting of a king performing religious rituals in temple of Bhutto. Some parts are decorated with hieroglyphic texts and lines, five titles of the king Psamtik I and the names of two kings “Va Ib Ra” and “Ahmos II” from the kings of the 26th dynasty.

Hossam Goneim, CEO of Kafr El-Sheikh Antiquities and head of the archaeological mission, said the mission also discovered from the inside a huge polished limestone building believed to be the source of holy water used in daily rituals. Consists of a bathtub, a water pool and a water heater. The entire bathroom is subject to the water cycle at the highest level in terms of water supply or drainage outside of it.