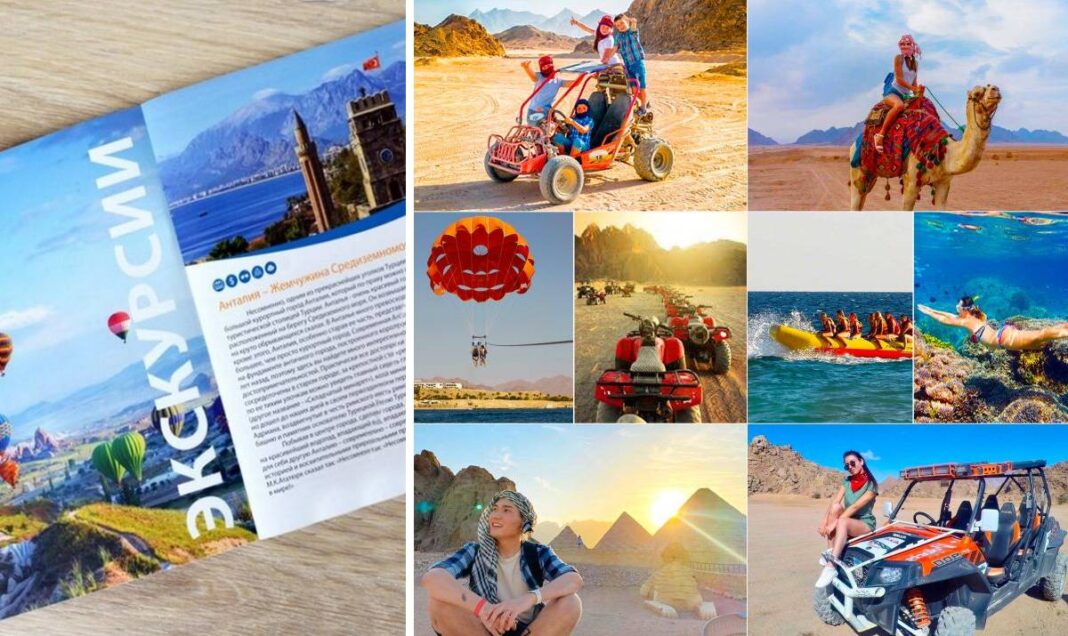 The “tricks” of hotel guides and their ways to get into a tourist’s wallet, as well as attractive excursion offers that should not be encountered, revealed in his blog an experienced tourist. Based on her own experience of traveling to Turkey, the tourist presented the receptions of hotel guides. But it should be understood that the same tricks are done by hotel guides in Egypt and other popular destinations.

“As it should be, if you have chosen a ticket and arrived from a travel agency, in the first days you will be scheduled a meeting with a guide. They are called “hotel”. You will definitely be told to appear on it. They may even threaten that you will not be issued vouchers,” says the tourist. But in reality it is not necessary to do so – she says. The main task of the guide – he is the first reception – to convince tourists to go on additional tours.

“Usually they have a portfolio with tours that they can offer you. And often there are no prices. If you are interested in something, you ask the guide, and he calls. And you pay him too. And after that, you will never know how much this tour really cost and how many dollars this person earned for you, ”the blogger emphasizes. Moreover, she assures that even if the price is traded, it will remain unreasonably high.

However, the second method is the “content” of excursions. Their tourist is divided into three types:

The first block is the type of excursions that do not need to be taken, because you do not need the services of a travel agency and can do it yourself. “For example, a tour of the hammam. In fact, the agency takes money for simply taking you to the boors. See on Google maps the location of the hammam, how to get there, and go yourself! The same applies to boat tours to different islands or just for swimming on the high seas,” – says the tourist.

The second block – free sightseeing tours, “free” of which is relative. “We came across it twice: in Antalya and in Marmaris. The third was politely refused. This is not a sightseeing tour. You are simply taken to textile, fur and leather stores, and if you need it, that’s fine. But if you expected to see the city, but saw only how they are trying to impose something on you, it is better not to spend precious time on it, and spend it at sea,” – writes the tourist. According to her, the word “free” is already a signal that you should not buy a tour.

The third block – very extensive tours, time and money. “For example, guides are very insistent on Istanbul. But first, you won’t see this huge city for the time that the guides offer. And they usually allocate 2 days. Given the road and the dream, this will be an incomplete one.

Secondly, it will be very expensive, because you will fly on a plane (go a very long time), and there you will book a hotel. It turns out to be very illogical – you have already been paid for in a hotel on the sea, it is not cheap there every day, but you do not use it and book another hotel, where you go for a few days,” says the tourist. In such cases, it is better to take a separate trip, and from the sea to limit yourself to taking short excursions, where to go 1-2 hours.

Similar to Istanbul and Cappadocia – tourists are not warned that it will only take about 10 hours to get there from the resorts. In addition, according to the tourist, they profited at every turn – at first, saying to pay separately for “included” breakfast, balloon flights were offered for $ 250, while it costs about $ 100. But this is not the limit. “What killed me on that trip was when $ 20 was collected from everyone so I could see the bullets. Just for you to stand on the street and watch the bullets fly. People were alarmed, and they began to ask, they say, what are we paying for? The guide, quickly orientated, replied that this is a special area, which offers a super beautiful panoramic guide, and there is a paid entrance. Now I know that it was the Valley of Love, and admission is absolutely free. We just gave the guide $ 60 (for three people). And now imagine how much she collected from the whole 50-seat bus?”, – said the tourist and urged her colleagues, “Do not let you so easily and brazenly deceive!”

She gives the following advice – in fact, there are locations that make sense to take tours. Some places are within 2 hours drive, and there is no public transport – various ancient cities, for example. But then I recommend taking tours from local travel agencies. Cappadocia was $ 120 cheaper than the price we took. And so with all the tours. Hotel guides will frighten you that these street travel agencies are unreliable, that they can bring you in and out, and that they are not responsible for you. But let’s think. In Kemer, near the Viking Nona and Olimpos hotels, there is a travel agency office. We found him in 2016. And he’s still there. There is a lot of competition, and all travel agencies value their reputation. If they provide poor quality services and get bad reviews, they simply will not survive in the market. And the sundress radio, believe me, works. So do not be afraid and feel free to take tours,” – says the tourist.

For those who care about a healthy lifestyle, we recommend reading: “Nutritionist called a simple drink that eliminates insomnia.”

Named Spanish resorts, where the most harassment and rape