In Europe, due to temperature records, wildfires, and deaths, tourists are asked to exercise extreme caution 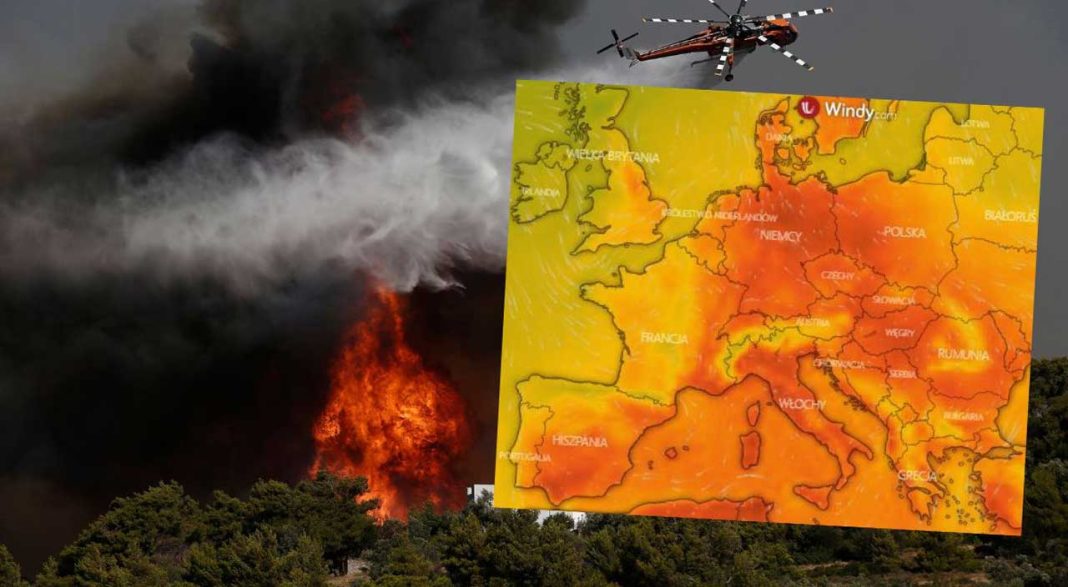 Europe was swept by a wave of heat. Forests burned in Spain, Italy, Greece, and France, and more than 1,000 heat-related deaths have already been recorded in Portugal. In England, the temperature record was broken. There were difficulties on the railway and problems with getting to airports. Due to the difficult situation, numerous warnings for tourists have been issued.

Europe has been battling extreme temperatures for nearly two weeks now. Because of the heat and fires, thousands of victims are already mentioned. The fight against the elements in Spain and Greece is hampered by strong winds.

Experts emphasize that the current meteorological situation, unfortunately, is a consequence of climate change, and there may be many more such events in the future.

The mercury column on Tuesday exceeded 40 degrees Celsius. Some places in the UK were among the hottest on Earth. For this reason, there were difficulties on the railway and problems with access to airports near London. The Gatwick Express and the Thameslink railway were out of service. The situation is slowly stabilizing. Today the temperature has dropped significantly and is about 25 degrees Celsius.

In an interview with the BBC, Transport Minister Grant Shapps acknowledged that the infrastructure built in the Victorian era is simply not ready to withstand extreme temperatures.

A fire has broken out in the far eastern suburbs of London. It swallowed up several houses and a huge strip of pasture in Wennington. The fire also broke out in several other places in the capital, such as in Dartford, as well as in a kindergarten in Milton Keynes. Fortunately, no one died. The swamps and meadows of England and Wales have not seen rain for a long time, the ground is dry, – said Adam Dombrowski, a correspondent for Polish Radio from London.

There was also a record of forest fires in the vicinity of Dartford on social networks.

Several hundred people were evacuated due to fires near Athens. Nearly 500 firefighters and 120 units of fire equipment are extinguishing the fire. 3 planes and 4 helicopters participate in the action. Extinguishing the fire is difficult due to strong winds changing direction. In gusts, its speed reaches 80 kilometers per hour.

A fire broke out in Penteli. The city, located 27 kilometers from the center of the Greek capital, has about 29,000 inhabitants. The fire destroyed 10 houses there. Traffic was halted on part of the ring road in Athens.

Over the past day in Greece, fires were extinguished in 117 places. The authorities of Athens called on other European countries to help and send firefighters.

Giant losses in Spain due to fires

During the heat wave, which lasted almost a week in Spain, more than 60,000 hectares of forests and meadows burned down, the authorities of the autonomous communities of the country, cited by the media, calculated. On Tuesday evening, the government of Galicia in the northwest said in a press release that the tropical heat had contributed to the outbreak of fires since Thursday, which in total killed more than 20,000 hectares of plantations and grasslands. One of the most experienced autonomous communities is Castile y León in western Spain, where nearly 30,000 hectares of forest and farmland have been burned, mostly in the province of Zamora.

Civil defense figures released late Tuesday show fast-advancing elements have killed two people in the province and wounded 15. Large fires are also breaking out in Extremadura, Andalusia, Asturias, and Catalonia on Tuesday night into Wednesday. Services say a rise in temperatures in Spain expected on Wednesday, along with strong winds, will be a factor that will make it harder for firefighters to fight the elements. 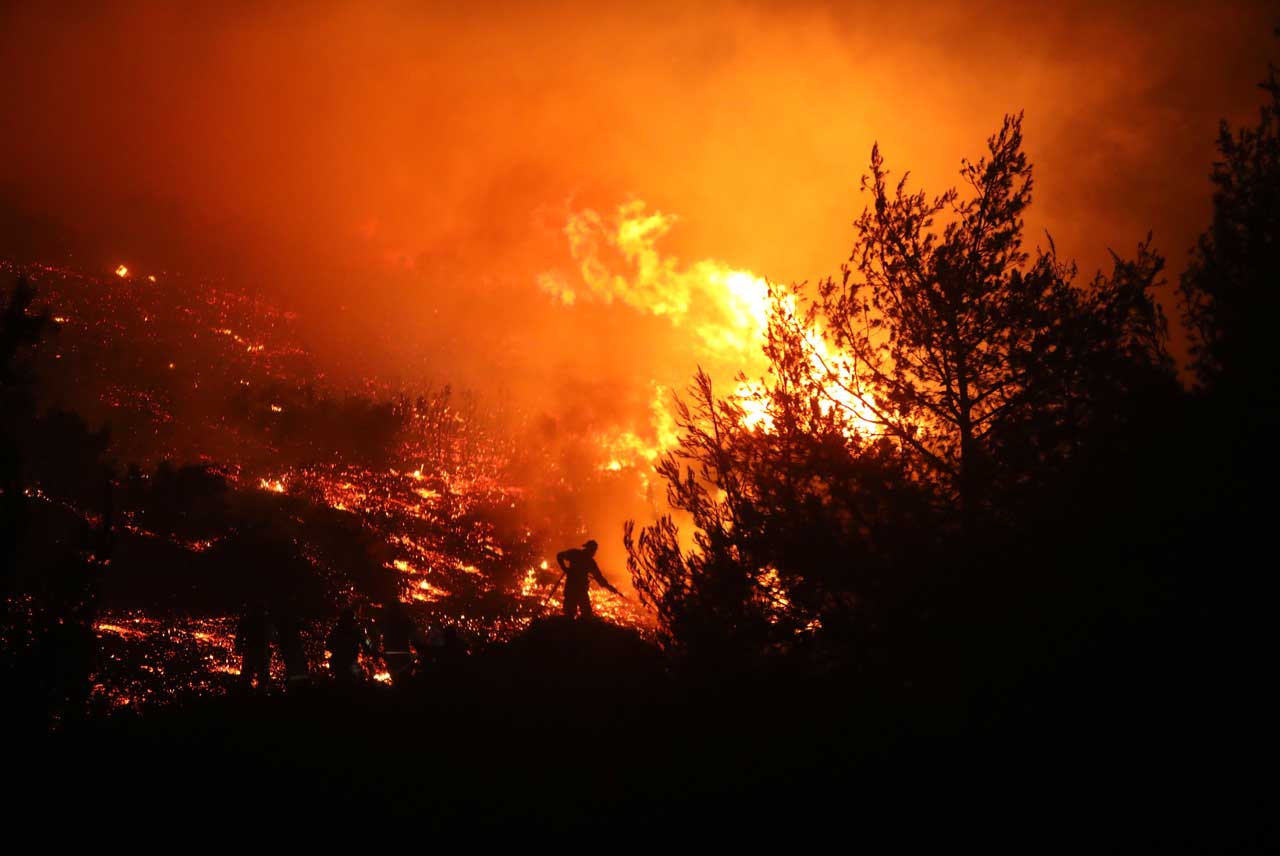 Tuscany is burning in Italy

About 200 people were evacuated on Tuesday evening in the area of ​​Lucca, Tuscany, due to a fire. About 500 hectares of forest and shrubs burned down there. “It will be a long and difficult night for firefighters,” Governor Eugenio Giani wrote on social media.

The fire has engulfed the hills of Massarosa in the historic land of Versilia. The situation in the Gualdo and Fibbial deposits is assessed as critical. Seven houses burned down there. The front of the fire is about a kilometer. The evacuees will spend the night in the gym. Fire brigades and vehicles from Lombardy and Emilia-Romagna were also called in to deal with the elements.

ABC News, in turn, published a shocking video showing how terrified train passengers were surrounded on both sides by raging fires. Fortunately, they were able to continue on their way and no one was hurt.

The heat is felt in France

In France, new record high temperatures were recorded in 64 settlements. Most of them are located on the western coast of the Atlantic Ocean, where temperatures exceed 40 degrees Celsius. Forest fires broke out in several settlements. in the southwest of the country. The highest temperature was recorded in France in 2019. The record set at the time in Verarga, northeast of Montpellier in the south of the country, was 46 degrees Celsius.

Thousands of deaths in Portugal

More than 1,000 deaths have been recorded in Portugal due to the ongoing heat wave. It started almost two weeks ago and the temperature was over 40 degrees. Graça (pronounced Graça) Freitas, Portugal’s director-general of health, said Portugal is one of the countries most affected by the extreme heat. We must be better prepared for periods of high temperatures, the director added.

The fires, which have engulfed the country for more than a week, intensified on Monday afternoon in northern Portugal. An elderly couple traveling by car died in the Vila Real area. The investigation shows that an elderly couple, who was traveling in a car, was taken by surprise by the elements and they failed to escape. The passenger car was on fire. Due to the fire on Monday afternoon, there were several dozen roads across the country, including two highways, incl. the route leading to Guarda.