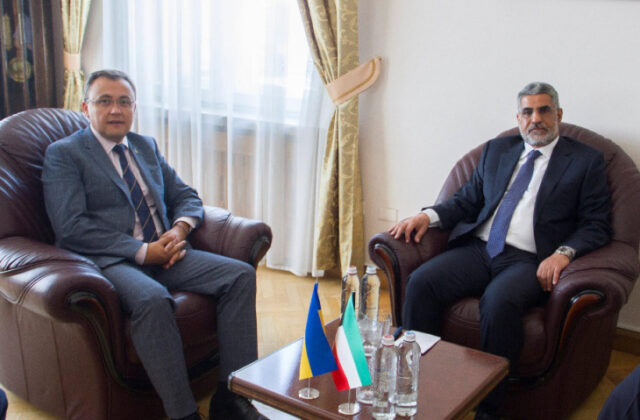 On July 28, 2020 the Deputy Minister for Foreign Affairs of Ukraine Vasyl Bodnar received Ambassador of the State of Kuwait to Ukraine Rashed Al-Adwani.

The diplomats agreed to hold political consultations between Ukrainian and Kuwaiti Foreign Ministries through videoconference in order to determine the priority steps for intensifying the bilateral political dialogue.

The parties noted the positive dynamics of growth of mutual trade by 53% over the past year and discussed further prospects for trade and economic cooperation. In this context, the interlocutors agreed to facilitate the preparation of the meeting of the Ukrainian-Kuwaiti Intergovernmental Commission on Economic, Technical and Trade Cooperation.

The Deputy Minister stressed that the implementation of joint investment projects by the Kuwaiti side on the territory of Ukraine, including in the medical sphere, provides a significant impetus for further deepening of economic cooperation.

The Ambassador of Kuwait praised Ukraine’s decision to liberalize the visa regime for Kuwaiti citizens, emphasizing that this step will not only promote closer cooperation at the political level, but will significantly encourage the establishment of direct business contacts, development of tourism and cultural cooperation.

THE STATE OF KUWAIT