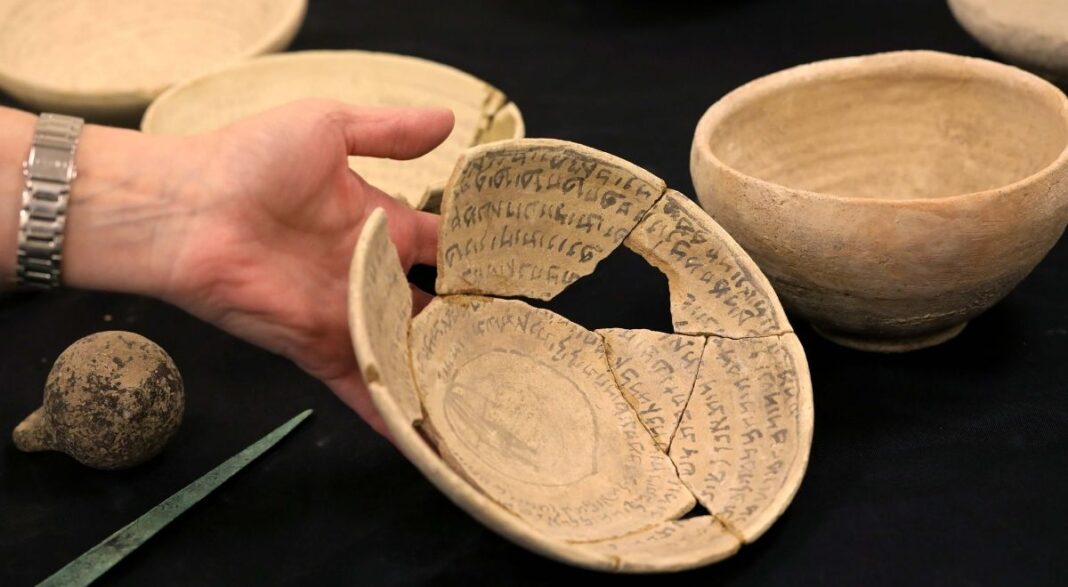 In the house of a resident of Jerusalem, the police and the Israel Antiquities Authority (IAA) found hundreds of ancient artifacts. Among the discovered monuments were, including numerous ancient coins, ivory, weapons, as well as 1500-year-old bowls with magic spells engraved on them.

The rare artifacts were kept in the Ramat Shlomo neighborhood of Jerusalem, in the home of a man long suspected of illegally selling antiques. The most valuable relics found in the criminal’s premises are the “fairy bowls”, also known as “oath bowls”.

This type of vessel was made between the 4th and 8th centuries AD. Magical inscriptions were written on the inside of the bowls in the form of a spiral, most often in Aramaic dialects. The ancients buried vessels under the floors of their homes to protect themselves from disease, curses, and demons.

– “Bowls for swearing” come from the regions of ancient Mesopotamia, that is, today’s Iraq. In 2003, after the outbreak of World War II in the Persian Gulf, thousands of stolen bowls of this type began to enter the international trade market, Amir Ganor of the Israel Monuments Authority told Archeology News Network.

In addition to dishes, rare items from biblical times made of ivory and decorated with ornaments depicting mythological scenes, animals or geometric figures were found in the house of a resident of Jerusalem. One of the discovered artifacts depicts, for example, two griffins (winged lions with human faces), and the other shows a column of lions with four wings marching one after another.

Researchers have already encountered similar items at archaeological sites in ancient Samaria (central Israel). According to scientists, this type of artifacts was made from the 9th to the 8th century BC, they performed decorative functions – most often they were nailed to wooden furniture.

Suspect faces up to 3 years in prison

According to representatives of the Israeli police and the Antiquities Authority, the detained man repaired and maintained the stolen artifacts, and then put them up for sale. In addition to relics, numerous chemicals used to repair pottery and clean metals were also confiscated from his home. The suspect faces up to 3 years in prison.

– Ancient monuments belong to all of us. They are our heritage,” said Eli Escosido, director of the Israel Monuments Authority, in an interview with Archeology News Network. – Unauthorized antique dealers encourage looters to destroy ancient monuments, as often happens when thieves are looking for items to sell at the antiques market. He added that in the name of greed, they are looting monuments, depriving them of their historical context and thereby obscuring part of human history.

The unspoken rules of conduct at the buffet

In which European countries and how much have hotel prices increased: published data for tourists