HomeGreeceCooperation between Ukraine and Greece to be strengthened in the interests of...
Greece
19.06.2020, 08:39 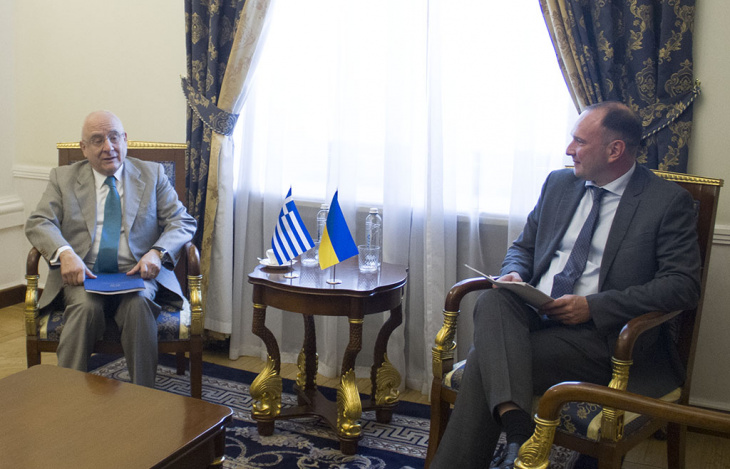 Deputy Minister for Foreign Affairs of Ukraine Yehor Bozhok underlined this during his meeting with Ambassador of the Hellenic Republic in Ukraine Vasileios Bornovas.

Deputy Minister Yehor Bozhok thanked for unwavering firm support by Greece of the sovereignty and territorial integrity of Ukraine. Ambassador of Greece Vasileios Bornovas assured in response that his country will further support Ukraine in restoring its sovereignty and territorial integrity and will condemn aggressive policy of the Russian Federation against Ukraine.

Deputy Minister for Foreign Affairs of Ukraine expressed gratitude for the support by Greece of Ukraine’s participation in the NATO Enhanced Opportunities Partnership. Ambassador of Greece noted in this context that his country steadily supports deepening relations of Ukraine with NATO and EU.

The sides discussed an important role, which the Greek community in Ukraine and the Ukrainian community in Greece play in the process of developing relations between the two countries.

Particular attention was attached to the discussion of possibilities for expanding bilateral cooperation in the educational and cultural spheres. Ambassador of Greece noted that the Greek side welcomes the promotion policy of the Ukrainian side towards education of the Modern Greek language in the education establishments of Ukraine. He also told that Greece would continue inviting Ukrainian students to learn the Greek language in the higher education establishments of Greece.

In view of the significant interest that the Ukrainian citizens show in visiting Greece for tourist purpose, the Sides discussed the possibilities for resuming direct air flights between the two countries from the 1st of July tentatively.